(Although, if you want to imitate “UASF” and call it “UARP”, I guess I won’t complain.)

For any pair of blockchains, I will define a txn as either replayable or non-replayable:

Above: Two ballroom dancers move in the same direction (promenade). From wikipedia.

If txn replay were perfectly achievable, it will be difficult to say that “two” separate coins actually existed at all. One “coin” would be more like a “block explorer” of the other.

These features are absolutely crucial because of coordination anxiety – the self-fulfilling fear of a coordination failure. Coordination is a flavor of multifactor competition, and one of society’s most challenging problems – in fact, it is the very problem that blockchains were invented to solve in the first place!1 When replay protection is on, users are thrust into what is essentially a big prisoner’s dilemma – users may want to switch from OldCoin to NewCoin, but they know that if they switch alone they are doomed. 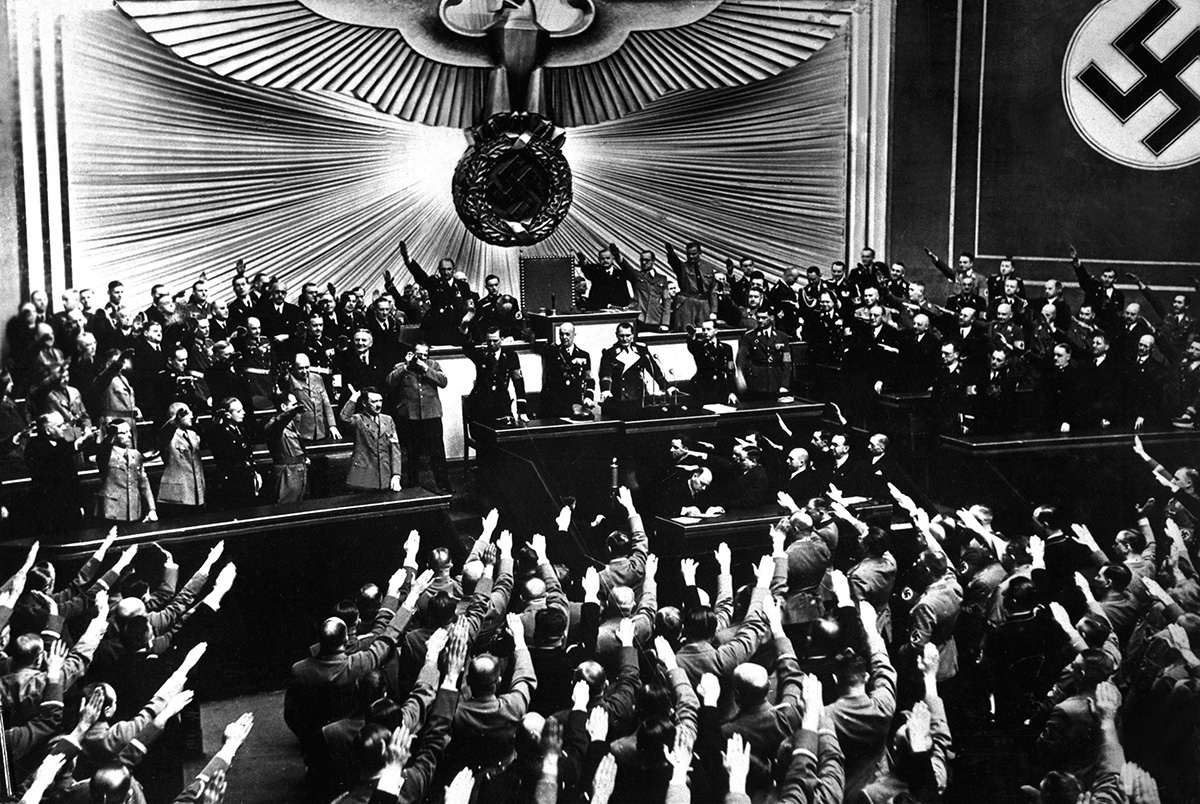 Above: Adolf Hitler announces “peaceful” annexation of Austria. Reichstag, April 1938. From this site.

Switching is best done with many other people simultaneously. This is exactly what GARP does. At first, when “most people” (ie, “the economic majority”) are undecided, GARP makes all the passive (“indifferent”) users into actual, full, transacting, fee-paying users of both networks. But later, after “most people” have decided to support one network or another, GARP will automatically kick users txns onto only the network whose software they are using.

With GARP, indifferent users are truly indifferent (they do not affect they outcome); and splitting is very user-friendly and easy (its automatic, in fact). Without GARP, indifferent users count as votes for the Old Network only (much like how the Soviet Union would count missing/blank ballots for the Communist Party by default); and splitting either happens all at once (with mandatory full RP) or else is very cumbersome (with zero replay protection).

But GARP has one final key advantage: it effectively forces exchanges to list the coin.

(With apologies to both Ben Stein and Brian.)

In crypto, its always nice when an exchange lists your coin. It grants liquidity to the coin and validation to your project. And you get lots of visibility, as well.

But there is something even better than having the coin get listed. It is: when the exchange gives you FREE MONEY! And then eventually lists the coin anyway!

Yes, if you’ve recently installed a GARP-enabled chain, then you are actually hoping that the exchange does NOT list the coin. If the NewCoin is unlisted, you can withdraw NewCoin from the exchange for free.

And it is quite easy to do.

You are now “fishing” for NewCoin. 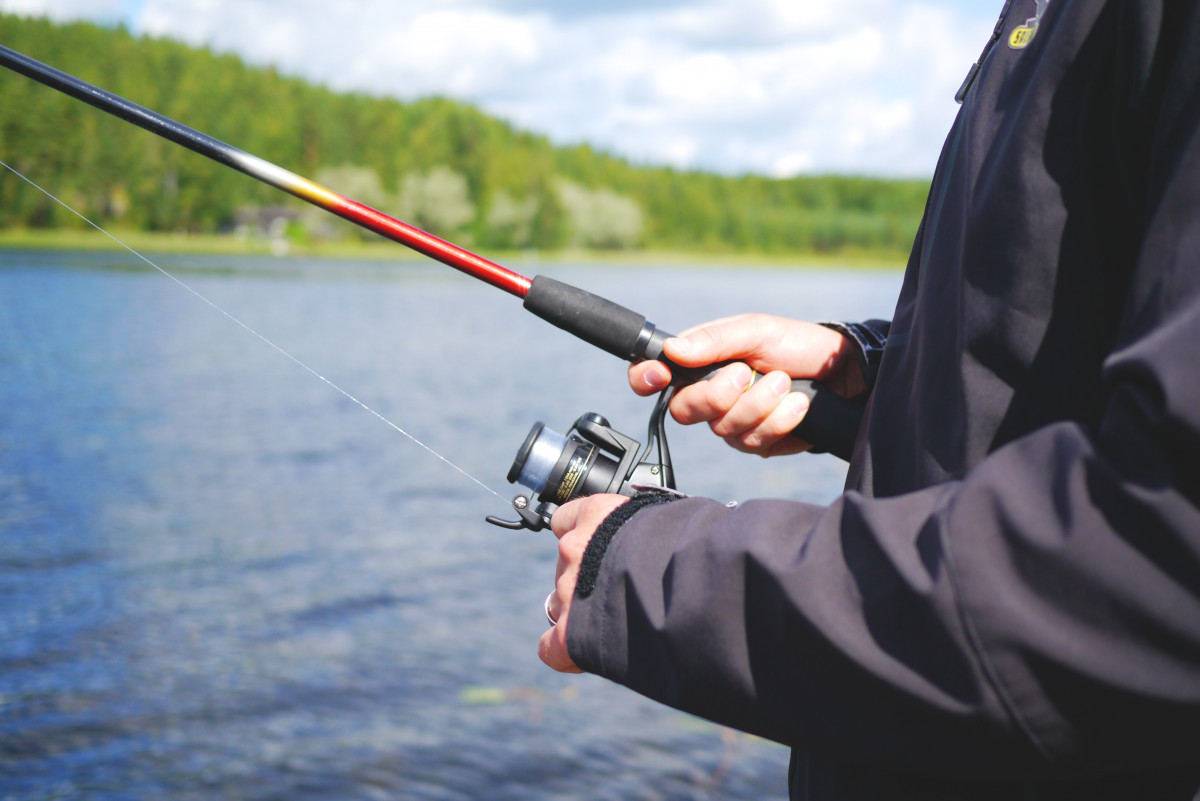 Above: “Fishing”. Free image from pxhere.com.

iii. Why It Works

It works because, when the exchange sends you your OldCoin withdrawal in step [2], they may have created a replayable txn (unbeknownst to them). If they do, you will get an equivalent amount of NewCoin for free. However, when you send in the OldCoin deposit, you will always be sure to construct a non-replayable txn, and so the exchange will never get their “equivalent amount of NewCoin”.

Many of the exchange’s customers will also be unaware of the second network (NewCoin). As these customers deposit OldCoin, they will unwittingly supply the exchange with fresh NewCoin. And so the fishing can continue! The fishing only stops permanently when the exchange becomes “NewCoin aware” – ie, when it takes measures to track the NewCoin and purposefully sequester it from the OldCoin.

If they are willing to become “NewCoin aware”, they may as well list the coin. At that point, listing the coin will cost them nothing; and the new offering will provide the exchange with a new revenue stream.

iv. It Can’t Be Stopped

But let us imagine that an exchange becomes “NewCoin aware”, but it still does NOT list NewCoin. Instead, the exchange takes all of the NewCoin that is sent to it, and keeps it for itself, in all circumstances. Let’s call it a “Sequestering Exchange”.

For example, a “NewCoin aware” exchange might not Sequester, but it might mandate that the two assets remained “joined”. In other words, this exchange does not credit you with “OldCoin” unless you deposit OldCoin and NewCoin in equal measure).

Since Joined Exchanges give crypto-sellers a better deal, “indifferent users” will flood Joined exchanges with fresh coins. These users think that they are getting free arbitrage money; but what they are actually doing is selling their NewCoin. They just do not realize it.

So the GARP coin is de facto listed, no matter what the exchange tries to do.

E. Has A Non-GARP Hard Fork Ever Succeeded?

In my view, only one prominent hard fork has truly succeeded: the July 2016 Ethereum Foundation hard fork, to reverse the effects of the DAO.

When I say “prominent” hard fork, I mean to exclude trivialities – such as bugfixes to very very early stage projects.

And by “truly succeeded” I mean that NewNet appears to have “replaced” OldNet in the apparent opinion of the network participants. Specific metrics for this include: market capitalization (an investor referendum), the daily transaction volumes (a user referendum), github commits (developer referendum), conferences and scholarly work (researcher referendum), and “who gets the old ticket symbol” (exchange / trader referendum).

The interesting thing about the ETH Hardfork is that it began with no replay protection at all, and with no contention. (So, it looked as though OldCoin would surrender, and there would be no network split at all). But when contention arose, unwanted txn replay began, ETH quickly implemented an “ETH splitter tool” in the new software. Since indifferent users would have to manually take advantage of this tool, the overall “ETH HF system” ended up approximating GARP.

So, the only serious HF to succeed, used GARP or something very very much like it.

BCH, in contrast, was a prominent hard fork that has so far failed to succeed. It has not replaced BTC in terms of market cap, developer activity, awareness or usage (stress tests notwithstanding).

What BCH did is almost the opposite of GARP. Instead of activate RP gradually, it was activated all at once. Instead of cater to the indifferent users, it thrust them immediately to a side. Worst of all, instead of allow people to upgrade on their own time, the presentation timeline of BCH ruined people’s ability to figure out what BCH was and what it was all about. This timeline included a surprise unexpected launch on Aug 1, 2017, and then a Nov 2017 “re-branding” of BCH as “the” largeblock hardfork of Bitcoin Core. Unfortunately, the long period of uncertainty stimulated coordination anxiety (instead of reducing it). It is easy to believe that many “opportunists” (those who quickly cashed out their BCH for BTC between Aug and Nov 2017) were actually largeblock supporters who believed in the viability of SegWit2x. So the largeblock train may have left the station on Nov1 with many of its supporters left behind.

That is completely the opposite of what is desirable in a hard fork. 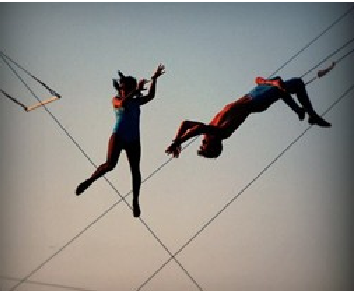 Above: Trapeze artists; from this slide deck.

When a network forks, most users will ask themselves “Which network are most other people on?”. This is basic network effect economics, and it prevents the two rival networks from competing on their merits.

GARP tries to make this question impossible to answer, for as long as possible, while still allowing speculators to easily choose a side as soon as they like.