One Chain to Rule Them All

Bitcoin will reign supreme as “the” blockchain, no matter how many blockchains there are.

Quarrels of the Ignorant

Bitcoin Maximalism is an extremely pro-Bitcoin approach. It says: “Bitcoin is the best, and will remain so”. It strongly rejects Altcoins – if an Altcoin invents something cool (~0% likely), Bitcoin can (and will) join it in doing that cool thing!

However, some people disagree. They believe that there will be many blockchains.

But, even if we allow many chains, notice this: Viewpoint A, “one chain to rule them all”, doesn’t actually contrast with Viewpoint B, “a billion blockchains”.

After all, the phrase “them all” is plural.

All true blockchain-experts can remember a time, April 2011, when Namecoin merged with Bitcoin, so that they could coexist in productive harmony. Namecoin was a “second” blockchain, but it was “ruled” by Bitcoin. Thanks to something called “merged mining” (another Satoshi invention), anyone who mined Namecoin could re-use that mining for Bitcoin. Merged-mining allowed Namecoin blocks to exist “inside” Bitcoin blocks! 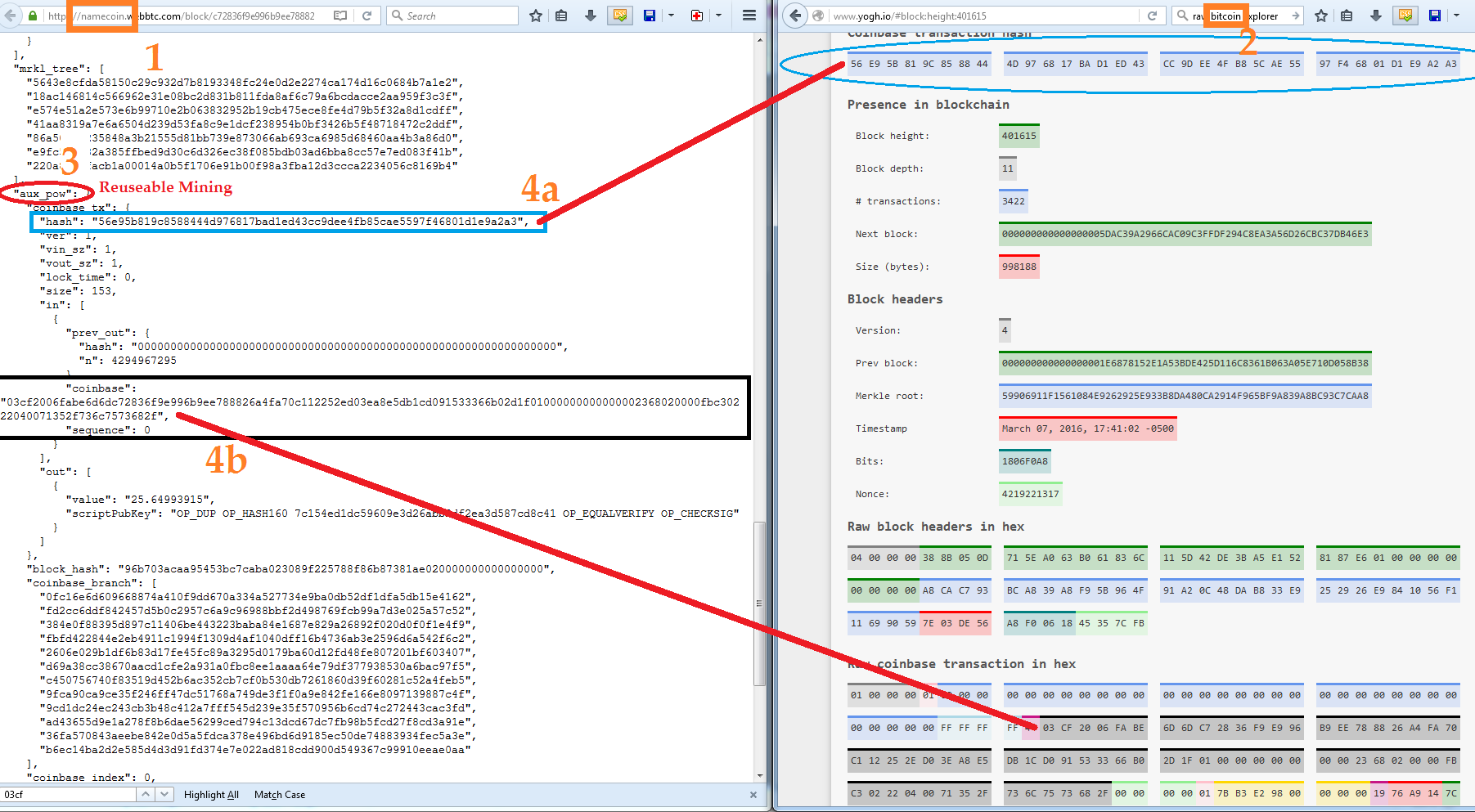 Namecoin demonstrated that any number of chains could hide inside Bitcoin, and simultaneously share the same PoW. Specifically, Namecoin was allowed to use all of Bitcoin’s PoW for free if only the miners would run the Namecoin software!

Merged-mining is a waterwheel which, if you clip more machines on it, does not slow down and can actually spin faster.

The story is even better for those who want immutability, but don’t need blockchain-consensus.

The process of “anchoring”, or using a PoW-blockchain to create an unalterable time-stamp, is so breathtakingly convenient that it has no requirements. Thanks to some fancy crypto, anyone can anchor any number of files, of any size (even whole databases) at a cost of zero. Bitcoin miners don’t need to run new software, and users don’t even need to send their data anywhere.

Whether you choose to merge-mine a blockchain, or to anchor a file, you will want to use Bitcoin (aka “the blockchain”) as your base-layer blockchain, because…

Only Bitcoin’s Hashrate Stands a Chance

Hashrate is graded “pass/fail” – either yours is high enough to achieve “immutability”, or it isn’t.

Let me use a new mining-analogy to explain this.

Let me first explain how PoW-security does not work.

When I was younger, I wanted to listen to my iPod in my car. Unfortunately, my 2001 Jimmy was too new to have a cassette player. ( Recall that the 1/8th-inch-to-cassette adapter was $5-$10, and worked perfectly. ) So, I had to get a (much more expensive) device which functioned as a mini radio broadcast tower. You’d set it to broadcast on some unused frequency, and then you’d simply tune your car radio to pick up that frequency.

The funny thing is, every now and then, you’d meet someone on the road who, evidently, had the same setup as you did (down to the same ‘unused’ channel). As you approached each other, there would be static interference. Sometimes, you would hear their music instead of yours, or both audio tracks at the same time! And, I assume, other drivers could occasionally hear my music (without my realizing it). My broadcaster, however, seemed to be pretty weak (it lost a lot) probably because it was a cheaper model.

Anyway, that is an example of broadcasting-interference on a continuous scale. The static starts small, and continuously increases as the rival cars approach each other.

Instead, imagine that all the miners are power plants, producing power. They use this power to broadcast from their mini-towers. Each separate blockchain system (for example, Bitcoin, Litecoin, Ethereum) would be on a different radio frequency – they don’t interfere with each other, they aren’t aware of each other.

However, let us turn our attention to attackers: competing broadcasts on the same frequency.

In fact, we can get clarity with <50% of the hashpower. Image only 40% of the miners are broadcasting “A”. If 5 different (non-identical) attacker groups, of 20%, 20%, 10%, 5%, 5%, are broadcasting overwhelmingly-similar-but-not-identical-to-A versions of “A”, then everyone on the network would still hear pure, unmolested “A”. No static.

On the other hand, if a fully-coordinated attacker group got 51% of the mining power, they could broadcast “B” (or “C” or “Q” or whatever they like). The original “A” message wouldn’t come through at all – everyone would be listening to “B” (and “B” would be coming in crystal-clear).

Bitcoin’s offer to share its hashpower is a generous one. It allows you to broadcast whatever you like, on 88.5, with 100% of 88.5’s voltage.

Bitcoin currently has the maximum available hashrate on the planet, making it immune to attack from the world’s supercomputers. 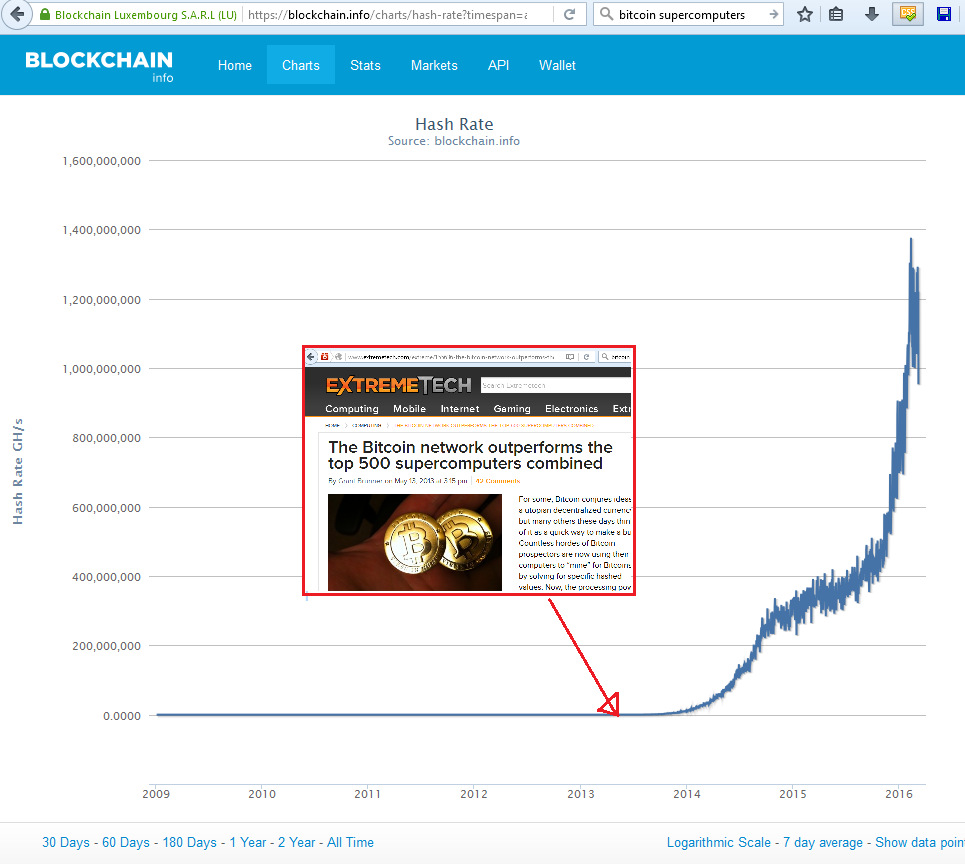 Again, recall that this offer is (nearly) free (requiring only that miners choose to run your software). With certain tweaks, it is completely free.

There will be “one chain to rule them all”. Being “ruled by Bitcoin” is awesome. It’s like living in your own personal copy of the world’s most heavily-secured, most luxuriously-appointed mansion…rent free!

Those who resist Bitcoin’s blockchain, don’t understand the deal they are turning down. It’s that simple.

A recipe for productive conversation.

The Trusted 3rd Party Doesn't Scale (But Blockchains Do)

At large scales, it would seem that only blockchain technology is likely to remain secure.