For a “payments chain”, how large would the blocksize need to be? And what kind of fees would be competitive?

GigaChain (GC) is a blockchain design. It is ultra-easy to make, and [probably] very useful.

Specifically, it is Bitcoin Core with two changes:

It is designed specifically to compete with VISA, being cheaper and faster1 while servicing a similar transaction load. (Of course, the larger blocksize will make the software more computationally intensive, and this must either be addressed with more expensive hardware or better engineering – those challenges are not the focus of this small piece.)

GigaChain is an alt-chain, and therefore might be an Altcoin or a Sidechain. As a sidechain of Bitcoin Core, GigaChain ends up as a highly ironic implementation of the “plexiglass window” concept of Peter Todd’s “Keep Bitcoin Free” video, because it meets his criteria:

In this case the “bank” happens to itself be a second, separate blockchain. As I explained at Scaling III there can be synergy among a “small-large” pair of chains. Indeed, my opinion is that only sidechains can resolve the blocksize conflict.

Let me briefly mention that GigaChain is a planned GitHub fork of the Bitcoin Core project.

The codebases will be identical (more or less), for as long as possible. Every additional line of code that GC requires (which will be very few) will be factored into its own separate files. Every line of code that needs to be deleted will instead be commented out. So the only difference in codebase (even visually) will be these new “include” statements, and their corresponding files.

This is to make it as easy as possible to maintain the project with minimal effort. We will wait for a new Core release, and then just click on “merge” to move in the changes.

In this way, I can guarantee that GC will have very good code. More importantly, I can prove that GC has good code, to third parties, as I evade the associated problems (ie, situations where poor users ask themselves “How can I know the difference between good and bad code, anyway?”). Not only do I neutralize “dream team” arguments, but I also neutralize the developer’s veto – it is impossible for a Bitcoin Core developer to “choose” Core over GC, or vice versa. Every Core developer is also a GC developer, whether they like or not. It’s a win-win.

If any dev wishes to make a change to GC, they should instead (try) to make that change to Core. If merged into Core, the change will then automatically sync over.

Eventually, I expect corporations (the whitepaper’s “businesses that receive frequent payments”) to build their own versions, optimized for the challenges of large blocks. But for now, any improvement to the codebase is probably just an improvement in general.

Here I have compiled some information (sources below) on VISA transaction processing (in “transaction per second”, or TPS):

We draw a few conclusions:

Our goal is to grow GigaChain into a VISA competitor within five years. How will VISA-net look in 5 years?

However, we have some facts to consider:

Therefore, I think the appropriate target is 8 GB/block. This would be more than enough block space to completely displace VISA, as it corresponds to 5.3% higher than one-third of the 22.8 GB figure.

I will start BX off at 8 MB/block, meaning that total Bitcoin transaction capacity (mainchain + sidechain) will exceed that of Bitcoin Cash. 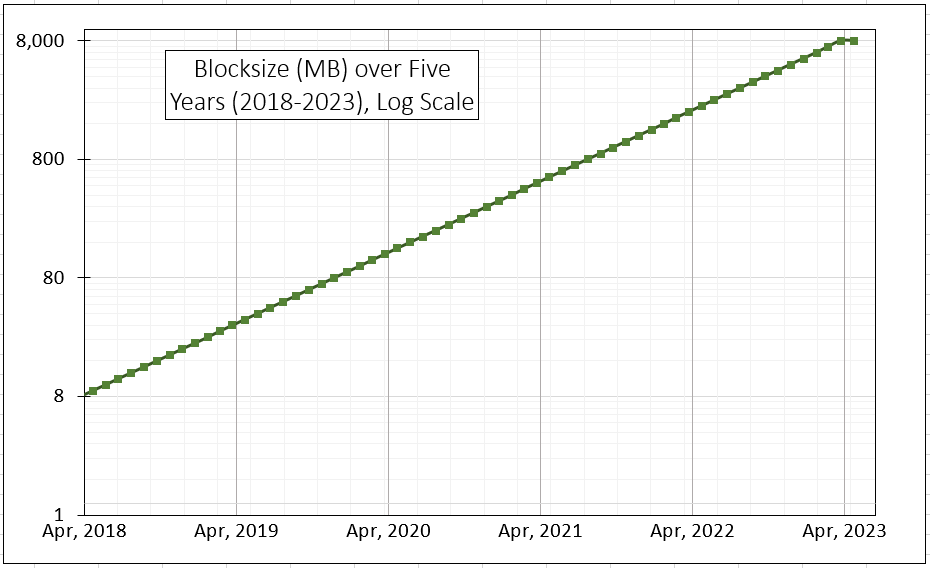 This part is optional.

Why impose a minimum fee?

Well, each txn must be proceed by all nodes. But each txn will only pay a fee to one node. All of the others are held liable for transactions to which they are a third-party. Therefore we have an externality problem – each transaction “pollutes” the blockchain.

The ideal way to address pollution would be to “internalize the externality”, by forcing each transactor to fully compensate every member of the network for the inconvenience of downloading/validating/storing/broadcasting his transaction. Unfortunately, not one has the slightest idea as to how this might be done, and many believe the task to be computationally impossible.

A second-best solution is to try to limit the network to its “natural” carrying capacity. This is one of the many functions of the block size limit in the first place. Imagine a fisherman extracting fish from a lake: if too many fish are extracted, the population will die. Also, for reasons which (I assume) are particular to the frequency/cost of “fish birth”, relative to the frequency/cost of “fish maturity”, laws exist to prevent fisherman from harvesting fish who are too young/small. Thus, if the lake is used more efficiently, the lake might tend to contain “more large fish” on average, and so its carrying capacity (in terms of fishweight/year) might rise.

So, we want to avoid a situation where a miner is tempted to mine an “inefficient block”, where this is defined as a block containing many low-fee txns. If users are unwilling to pay a minimum fee, this may indicate that they don’t appreciate the resource of blockspace.

Therefore, we might want a typical txn (250 bytes) to cost at least2 some amount.

A second reason to favor a minimum fee, is that sidechains have no block subsidy. Altcoins can have their txns subsidized by an inflation tax, but sidechains cannot. In the very long term, Bitcoin’s subsidy will run out and the network will need to sustain itself on (floating) txn fees alone. While this is a good plan in theory, it has never been tried before in practice.

A third reason for mandatory, BTC-based pricing, is that it is a rare example of a Bitcoin-based “unit of account”. I think it sends a good message to the world about taking Bitcoin payments (and Bitcoin-as-intrinsic-value) seriously.

I conjecture that the typical txn should cost at least 0.25 USD. This would come to a rate of 10 satoshi per byte, assuming a constant exchange rate of 10,000 USD per BTC (more about that later).

Compared to VISA, this fee is extremely competitive. I highly encourage everyone to visit this site and examine their breakdown of VISA tx fees. It is quite obtuse, and I even shuddered while reading it, despite multiple graduate degrees / work experience in mathematics, finance, and economics. I must say, after my years of Bitcoining, I found VISA’s parade of arcane fees to be…almost claustrophobic. The bottom line is that VISA charges about $0.25 plus 1.85% per txn. Yikes!

Defending Against a Spam Attack

Since capacity and fees are fixed, let us consider the case where a disinterested third party intends to blockade the network by purchasing all the block space for themselves.

Miners could of course fill up a block with ‘circular txns’ which pay transactions from themselves to themselves. And therefore they can create any size block for “free”. (Of course, in that case the miner would pay an opportunity cost instead of an explicit cost.) On top of this, any attacker (miners included) must devote 8 million USD worth of capital to the ‘circular txns’ project, for the duration of the attack.

If the USD/BTC exchange rate increases dramatically (as it often does), the fact that the 10 sat/byte fee rate is fixed, will cause the effective USD/txn rate to increase.

This quite a problem to solve! The only way may be a very simple one: have the required minimum fee rate (sat/byte) fall slowly over the five years. Then have it go away (or become an optional soft limit).

If the exchange rate increased by three orders of magnitude, from $10 thousand to $10 million, it would imply that Bitcoin had displaced just about all of the fiat currency in existence.

But hey, a guy can dream, so let us have the fee fall by three orders of magnitude3 over 10 years. 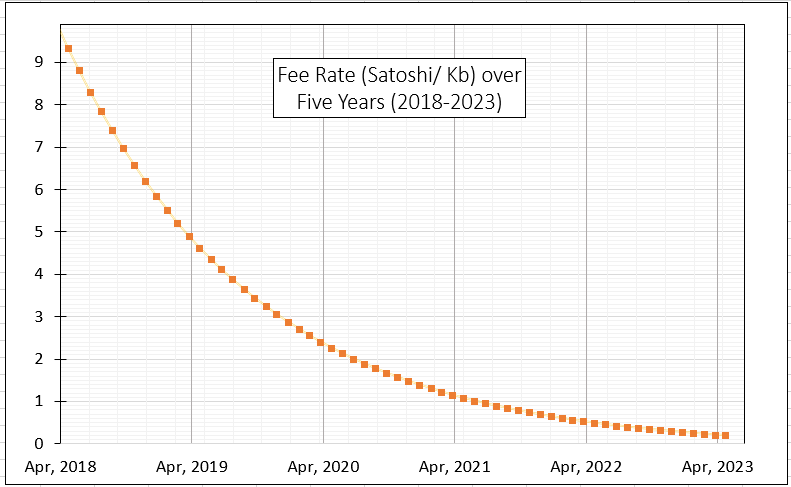 Under this schedule, the minimum fees can only become prohibitively high (ie, “un-VISA like”) in worlds where Bitcoin is already destroying the existing financial infrastructure.

A hashrate-majority can easily defeat a UASF. Moreover, they can do so without inviting retaliation, because upgrades do not generalize from the particular to the universal. The UASF is not only ineffective, but it can also result in loss-of-funds.

Has something happened to “Bitcoin Maximalism”? Is Bitcoin “Qwerty” (established and standardized) or “Esperanto” (impractical and perfectionistic)?