An ultra-simple, but extremely effective wallet-side Bitcoin privacy tool: sending your coins to yourself, in a way that makes it look as though you are sending them to someone else. Every wallet should have this tool!

A. Pros and Cons

Deniability is a simple tool that makes it very easy to “shuffle” your coins (ie, send your UTXOs to yourself). After running it, it will look as though all of your BTC has been sent away to other people (when in reality it remains with you). In other words, Deniability allows users to claim –credibly– that they own no Bitcoin.

The downside is that we must mix in “fake” transactions together with each “real” txn. Therefore, extra blockspace is consumed, and extra txn fees must be paid.

One way to think about it, is to imagine that “deniable” transactions take up roughly three times the size as regular txns (as they’d require, on average, two additional “dummy” txns). This triples the blockspace required, from about 500 bytes total (for one modern transaction)1 to 1500 bytes total on average. This is actually quite competitive – for reference, Monero’s brand new, state of the art, ultra-private bulletproof txns each require 1800 bytes2 in their absolute best-case scenario. So if we take that to be the industry standard, Deniability is still actually ~17% smaller.

A further downside is that user’s funds are spread out over many more UTXOs than they would be otherwise. Thus, in order to spend the same magnitudes, the deniability-user must be prepared to make larger txns down the road.

However, if we again compare the best-case 1,800-byte Monero txn to a worst-case “Deniability clean-up” txn, (one which has been split twice, and whose three outputs must unfortunately be recombined in a third txn) the total byte cost is still much lower. 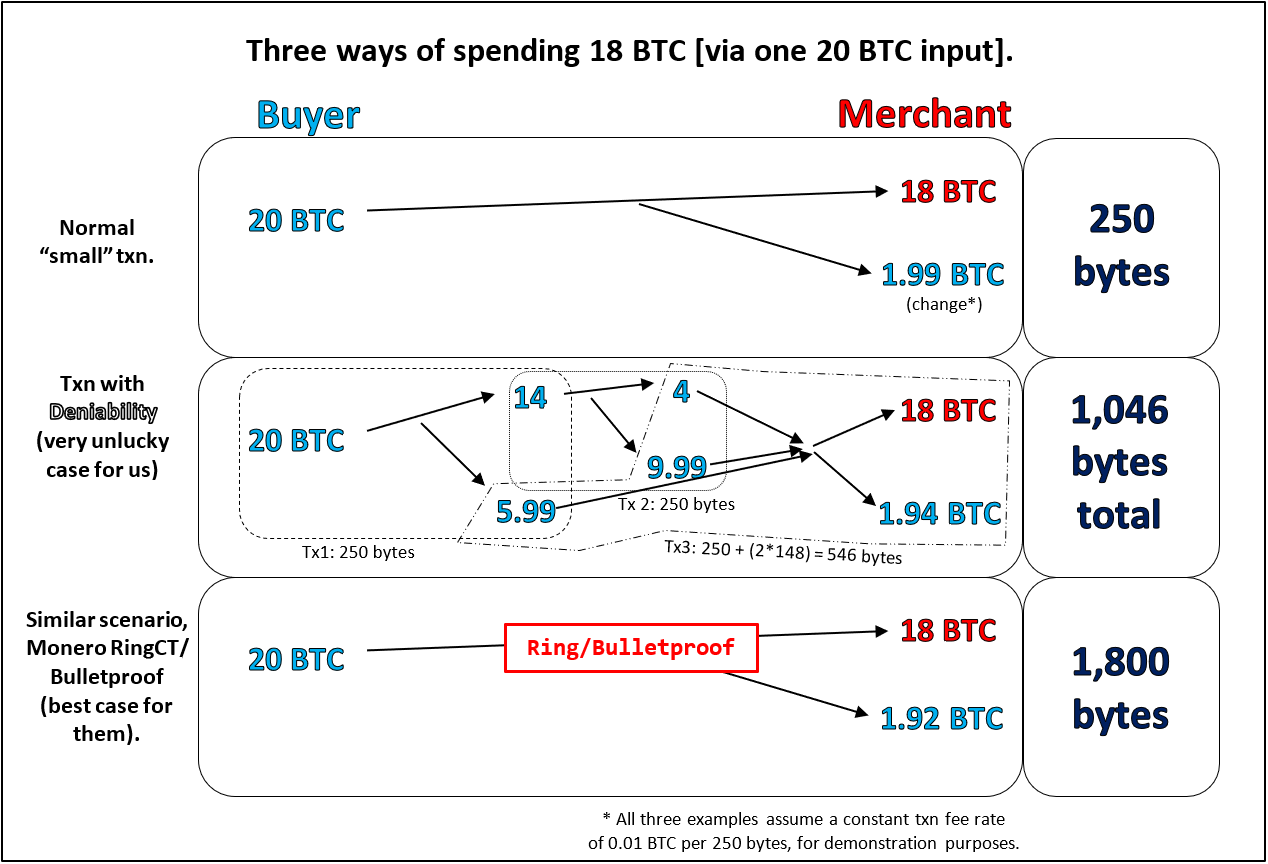 This is because each BTC input requires only 148 bytes, which is extremely small compared to Ring/Bulletproof’s total size of 1800 bytes.

So, relatively speaking, the costs are negligible. On a “payments” blockchain, such as the BCH network or a largeblock sidechain, the costs [to the transacting user] are almost nonexistent.

This idea presented below is…

…but despite that, it has several interesting properties:

The second property is crucial. Without it, we have a so-called “unraveling market” and no useful privacy. Ideally, it is achieved when someone invents a technique that is both cheaper and leaks less information (thus drawing in the “mainstream” users, so that the “stigmatized” users can freely intermingle with them). Unfortunately, these miraculous “cheaper AND more private” breakthroughs are very rare. Even worse, they violate the 3rd property (“cheaper meta-privacy” is inconsistent with “as-needed privacy”).

The first property is also quite useful. Interaction (of any kind) always opens the door to harassment – an adversary can join the set of interacting members, but fail to interact properly. It also opens the door to surveillance: many “mixing processes” (such as the “Coin Shuffle” – now default in Electron Cash) require real-time message exchange over the internet – adversaries may be able to observe this traffic. Worst of all, CoinShuffle breaks completely if the attacker Sybil attacks it (ie, connects to you pretending to be “many” “other” people for you to mix with).

Before I continue, let me say that “Deniability” is a very simple and very old idea, that many people bring up from time to time. It does nothing “new”, it is merely a collection of “wallet-side” tools to make the shuffling process easier (ie, less labor-intensive, and with less potential for error).

I believe that it is profoundly under-appreciated. It is very effective and very easy, and painless to implement.

If so easy and useful, why don’t have it already?

Well, it is probably due to two stigmas: [1] the sigma of “wasting” block space4; and [2] the stigma of working on a privacy technology that is non-mathematically impressive and ostensibly uncreative.

II. How it Works

Here are the steps that Deniability performs:

This process is then repeated an arbitrary number of times. Alice can “Deniabilize” every single one of her UTXOs, as many times as she likes. She can even (and occasionally should) Deniabilize UTXOs that she has just Deniabilized.

We can (and should) make the tool much better in a few ways:

So far, we’ve assumed that the attacker is watching the blockchain, but has NOT gotten his hands on anyone’s wallet.

As a result of that assumption, it does not matter if Alice’s wallet software explicitly tracks, and stores, the Deniabilization history of her UTXOs. In fact, this greatly improves the user experience.

Clever Bitcoin users will keep their private keys on a “cold” medium (eg, an air-gapped machine, a hardware wallet, pen-and-paper, etc). They will pair that device with a “watching only” wallet (a “hot” wallet which is connected to the Internet). The hot wallet can create and monitor transactions, but it cannot move funds because it cannot sign transactions.

Obviously if an adversary finds the cold storage, it’s game over – they can find all the funds and steal them.

But what if we want “Deniability” to work well, even in cases where the “watching only” wallet is found by the adversary?

The core privacy issues with Bitcoin’s UTXO model are: 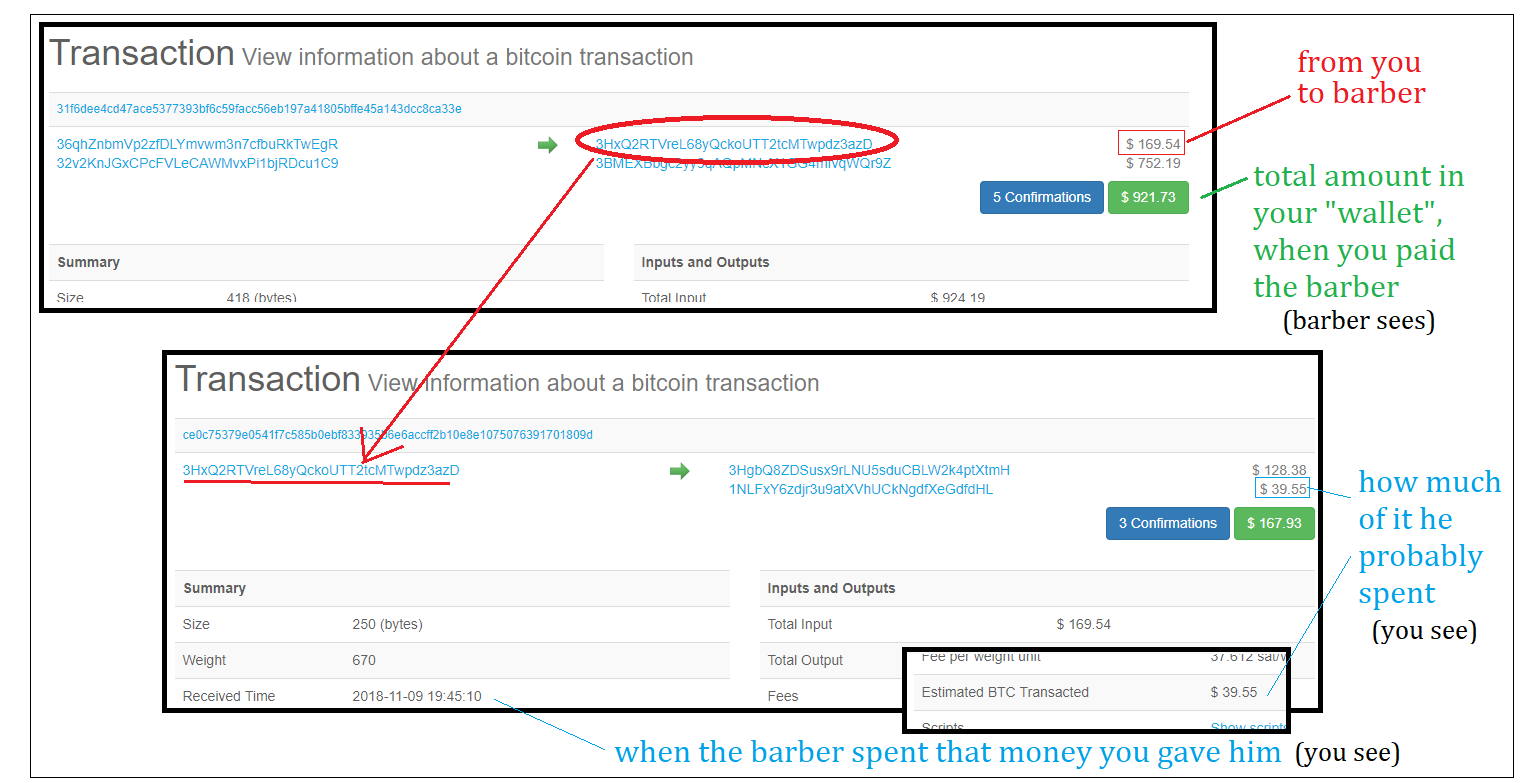 Deniability addresses both issues. First, upon receiving money, you can mix with yourself immediately an unlimited number of times. Your employer will not know how much of your money has “actually” been spent and how much has merely been “Deniabil-ized”. Second, immediately before a purchase, you can use Deniability to make a “right-sized” output (one which is exactly the size that you want to spend) – in a sense, you’ll be able to give your barber ‘exact change’.

B. The Flow of Information

Satoshi laid out a specific privacy model for Bitcoin. Instead of blocking the visibility of the txns themselves, it involves “breaking the flow of information in another place”…

…specifically breaking the relationship between “public keys” and “individuals”.

But what I set out to do here is more like the original (traditional banking model) plan: to break the visibility of “actual economic transactions” …by breaking the relationship between those and the (observable) on-chain blockchain “transactions”.

Imagine that Alice and Bob are known associates, and they each of them may be users of Deniability. Further suppose that a “chain analyst” already knows that UTXO #345 belongs to Alice.

Finally, let us assume that the blockchain grows, and that the new blocks contain exactly four new transactions:

Here below, I show the individual TXOs as numeric values, and the transactions as multi-pronged arrows connecting them:

In a world with Deniability, what can the analyst conclude from this information?

Well, it is possible that all five of the surviving UTXOs (#350, #351, #349, #352, #353) actually belong to Alice. This would happen if Alice Deniabilized #345, and the randomization software buried that output beneath four “layers of deniability”.

But it is also possible that four of the five UTXOs belong to Bob. Alice may have “right sized” output #347 so as to pass Bob just the right amount (#353) in txn four. Txn two may have been a second “real” payment to Bob, with him obtaining output #348 (which he later deniabilized in txn three). Alice owns #349 (and Bob owns the rest).

Or, perhaps #349 is not what Alice owns at all. The txn in which Alice paid Bob could instead have been #346. In which case #347 would be Alice’s change. Then Alice performed a simple deniabilization, sending all of #347 to herself. So Alice owns #353, and Bob owns the rest (which he deniabilized).

Or, Bob could own just one of the UTXOs, #349, and Alice could own the rest – the exact reverse of the example two paragraphs ago.

Or, we can recast the second example in yet another way. Imagine that #346 is Alice’s change from a “real” first purchase, and that #349 is her change from a second “real” purchase. Alice still ends up owning only output #349, and yet she hasn’t touched the Deniability option once. It was Bob who did all the Deniabilizing! This is an example of the “meta-privacy” property. And of course, a reverse stories are possible where Bob never used Deniability and only Alice did.

Consider how effective this technique has been, even on the scale of this absurdly oversimplified toy example. We started with the adversary knowing everything – specifically, that UTXO #345 was owned by Alice. But just four transactions later, and the adversary now knows basically nothing: first, he knows that some, or all, or none, of the value of #345 might have been directed to Bob. If we expanded the example to include Carol, the adversary would know even less. And, in the real world, this “example” would not be limited to Alice/Bob/Carol …it would include everyone on Earth.

In general, these two types of txn will always resemble each other, by design:

The two will resemble each other in every way, if Deniability is configured correctly. And so there should be effective mixing between the two.

Do any lite clients randomly query full nodes for random transactions (ie, random regions of blockspace)? This would help user to “deny” that they actually own any of the coins they are asking about. In fact, the mere presence of this option may be sufficient to give considerable “deniability”. It needs only to be on by default, and located in a very popular piece of software.

Deniability is a very simple idea, that probably helps user-privacy substantially and at very little cost. It is easy to code, especially for “normal” (non-blockchain) developers who are used to caring about UI/UX, and used to having the freedom to implement something however they choose, and in a way that can constantly improve over time by getting user feedback.

Privacy is impersonation. To be useful, a privacy tech must be [1] cheaper, or at least [2] have costs which are themselves private.